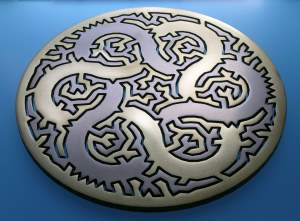 My friend and co-author Bob Bosch was awarded First Prize in the Mathematical Art Exhibition held by the American Mathematical Society. This work was based on the Traveling Salesman Problem:

He describes his work in the exhibition catalog: “I began by converting a drawing of a two-component link into a symmetric collection of points. By treating the points as the cities of a Traveling Salesman Problem and adding constraints that forced the salesman’s tour to be symmetric, I constructed a symmetric simple-closed curve that divides the plane into two pieces: inside and outside. With a water jet cutter, I cut along this Jordan curve through quarter-inch thick, six-inch diameter disks of steel and brass. By swapping inside pieces I obtained two copies of the sculpture. Here, steel is inside and brass is outside… After I get an idea for a piece, I translate the idea into a mathematical optimization problem. I then solve the problem, render the solution, and see if I’m pleased with the result. If I am, I stop. If not, I revise the mathematical optimization problem, solve it, render its solution, and examine it. Often, I need to go through many iterations to end up with a piece that pleases me. I do this out of a love of mathematical optimization–the theory, the algorithms, the numerous applications.”

If you have a spare hour or two, be sure to check out the complete exhibition. Hmmm.. I have had some thoughts about translating my baseball schedules into Lego. I wonder if that could compete? Maybe not. I am the proud owner of two Boschs: I received a copy of a domino portrait of myself (I periodically use the portrait as my photo). I also have a spectacular traveling salesman art based on work by Warhol. If you visit my office, I have placed it so it is seen at the end of a long hallway. It is a conversation piece for all the hallway residents. You can get your own Bosch at Domino Artwork. There are also instructions for teachers who want to make a domino portrait of Barack Obama, Abe Lincoln, Martin Luther King, and others as classroom projects.

Thanks to Twitter’s @wjcook (Georgia Tech’s TSP guru Bill Cook) for the pointer.