I am just back from attending the PATAT (Practice and Theory of Automated Timetabling) Conference in Belfast, a conference I will write about in the next few days.  During the trip, I was never without my trusty itouch.  I used to travel with a Kindle, but since I started downloading my Kindle books to my itouch, my Kindle sits beside my computer with a forlorn “Your battery is empty” message on it.  While I like the Kindle screen, the itouch works much better for me for two reasons.  First, the itouch is much smaller, so it fits in my pocket.  I have a great fear of being without a book to read, and it is comforting to know that I always have a half-doze on me at all times.  Second, I often read in dark bars, and the backlight of the itouch means I can always read, albeit while looking more nerdy than normal.

On this trip, I had a good opportunity to get through some guilty pleasures:  books that are fun, without being particularly challenging.  I’m not talking Dan Brown territory here, but these are not exactly Proust’s À la recherch du temps perdu.  But I got a surprise in two of the books I read.

The first came from Tongues of Serpents by Naomi Novik.  This is a series that combines Napoleonic era naval combat with dragons (kind of Patrick O’Brian meets Anne MacCaffrey).  The initial books in the series were a revelation.  At book number six, Tongues no longer has the ability to astonish, but I still find the series enjoyable.  Early in the book, the heroes of the book receive a letter from the dragons back in England who have had to find work in order to support their prodigious appetites.  The letter goes:

But we contrived:  Majestatis suggested we should send Lloyd to Dover, to inquire after carting work, and we have worked out than men will pay a great deal just for us to carry things to London, and other Towns,  as we can do it much more quickly than Horses; and I have worked out a very nice Method by which one can calculate the most efficient Way to go among all of them, taking on some goods and leaving off others; only it grows quite tiresome to calculate if one wishes to go to more than five or six places.

It is not clear whether this is the Prize Collecting Traveling Salesman Problem or a Pickup and Delivery Problem, but it is clear that the dragon-author has found a difficulty in solving NP-complete problems. 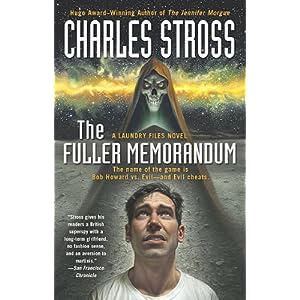 The second appearance of operations research occurs in the Fuller Memorandum, a comedy/horror/science fiction/spy novel by Charles Stross.  This is not my normal type of reading (I don’t do suspense very well) but this series is fun and creative.  In this scene, the girlfriend of the main character is discussing a research result with a scientist.  The scientist has shown that the world is about to end due to an infestation of “class three abominations” who do all the normal things abominations do:  suck out brains and the like.  The scientist explains:

You must understand previous models all seem to have looked at how possession spreads through a sparse network, like classical epidemiological studies of smallpox transmission, for example.  But that’s flawed:  if you posit an uncontrolled outbreak, the people can see their neighbors, random strangers, being possessed.  And that in turn weakens the …[another paragraph in the same vein]

Wow!  It looks like Stross has been reading Punk Rock Operations Research!  But then we get the killer line, which suggests he really does read Laura McLay’s blog:

I modeled it using linear programing and the results are, well, they speak for themselves.

Sometimes people laugh at me and say “You see operations research everywhere!”.  While that is true, sometimes it is pretty obvious!