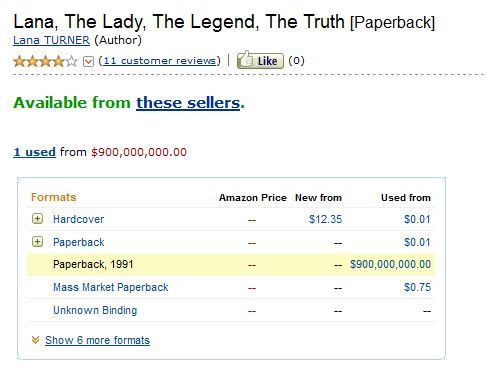 The Twitterverse is giggling over some of the absurd pricing for some used books at Amazon (Panos Ipeirotis and Golan Levin were two  who tweeted on the subject).  There are books at Amazon where the price is in the millions of dollars!  How can such a thing happen?

While I love the picture of an eager seller (“I have just two books for sale, but, man, if I sell one, I am set for life!”), the explanation is much more mundane, at least in some cases. As the “it is NOT junk” blog shows, it is clear that two sellers of the book The Making of a Fly (a snip at a price height of a mere $23 million) are setting their price relative to each others price.  Seller A sets its price equal to .99830 times that of seller B;  B sets its equal to 1.27059 of A.  Every day the price of the book goes up by a factor of 1.26843.  Do this for a few months, and you’ll get prices in the millions.

This sort of market driven pricing is not unreasonable.  Sellers with good reputation are able to command higher prices (see, for instance, the paper by Ghosth, Ipeirotis, and Sundararajan on “Reputation Premiums in Electronic Peer-to-Peer Markets” for results and references). A firm might well feel that its reputation is worth a premium of 27.059%. Another firm might adopt an alternative strategy of just undercutting the competition by, say .0017%. Everything works fine until they become the only two firms in a market. Then the exponential growth in prices appears since there is no real “market” to base their differential on.

Such an issue would be nothing more than an amusing sideline if it weren’t for the effect such algorithmic prices can have on more important issues than obscure used books. The “flash crash” of the stock market in 2010 appears to have been caused by the interaction between one large sale and automated systems that executed trades based on trading volumes, not price. As the SEC report states:

Pricing based on markets abound.  At the recent Edelman competition, one of the groups (InterContinental Hotels Group) discussed a price-setting mechanism that had, as one of the inputs, the competing prices in the area. Fortunately, they had a “human in the loop” that prevents spiraling prices of the form seen at Amazon.

In a wish to be quick, there is great pressure to move to automated pricing. Until we create systems that are more robust to unforeseen situations, we risk having not just $900,000,000 books, but all sorts of “transient” effects when systems spin out of control.  And these effects can cause tremendous damage in a short period of time.