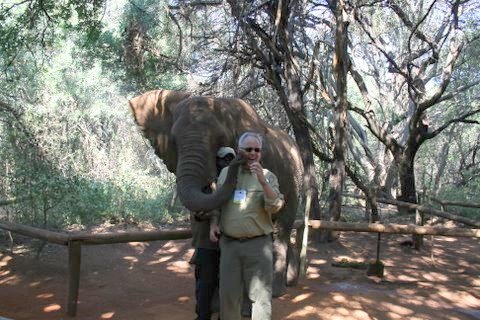 So what happened to my “live blogging” at IFORS 2008? Well, unfortunately I had an administrative role at the conference (nothing like the real work of Hans Ittmann and John Bartholdi, but a role none-the-less) and that took time. And I am always a believer in the “social networking” aspects (read: hanging out at the bar with friends), and that takes time. And I did go on one of the famous IFORS outings, where I got sucked at by an elephant. Finally, I spent 3 days at the end at a lodge with no internet connection (technically, there was an internet connection, but I pretended it didn’t exist). Put it all together, and I fell a bit behind. But here are some notes that I took along the way. 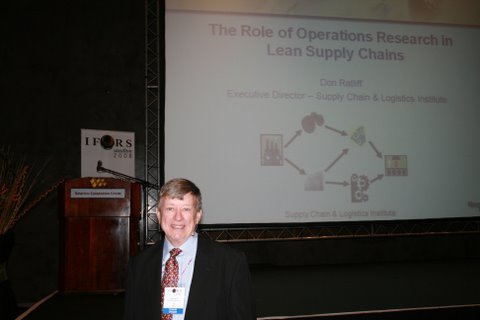 The Tuesday plenary speaker was my co-adviser from 20 years ago, Don Ratliff from Georgia Tech. Don has had a great career, both in academia and in business. He was editor of Operations Research for a while, and published a number of interesting papers. He also founded CAPS Logistics, which was later bought out by Baan in a rather confusing and lawsuit-laden muddle. The title of his talk was “The Role of Operations Research in Lean Supply Chains”. He began by drawing an analogy between lean production and lean supply chains. In his view, lean production involves three main components:

He suggested that there has been insufficient effort to adopt these precepts throughout the supply chain. Partially this is a result of the multiple actors within a supply chain. It is typically easier to say “do this” within a factory with a common boss; supply chains often have multiple people involved, including the customer, making it harder to do things like waste removal and synchronization. But there are significant savings possible, making things worthwhile.

I thought the most interesting point he made came under the area of “continuous improvement”. He pointed out that ERP (Enterprise Resource Planning, the SAPs and Manugistics of the world) have shut OR out. It is hard to improve part of the system, when that part is embedded in a larger whole. In essence, OR has missed out of ERP, so nothing much has changed in OR since the PC (which did have an effect on the OR world and thinking). But he identifies SOA (Service Oriented Architecture) as a great new opportunity for our field. Quoting from wikipedia:

Service-Oriented Architecture (SOA) is a software architecture where functionality is grouped around business processes and packaged as interoperable services.

It is through these services that OR can have its strongest effect. If you have a better routing system, you can embed that in the routing service of the SOA system, improving that aspect without affecting the rest of the system. This is exactly what is needed for continuous improvement, and exactly what OR is good for.

Within OR, we often don’t track IT concepts such as SOA or business intelligence, but we should: it can have a great effect on how our work is used in organizations.

I thought this was another very good plenary, and again the audience seemed quite engaged with in.

7 thoughts on “Don Ratliff at IFORS”