During the last winter Olympics, I had what I thought was a pretty good idea.  There are many ways to rank countries during the Olympics:  you can rank them by total number of medals, or you can rank them by number of gold medals, or by some point scheme (5 for gold, 3 for silver, 1 for bronze) and so on.  Point schemes seem to make sense, but then people argue about points.  Is a gold worth 5 bronzes or 4? Is 2 silvers more than, less than, or the same as a gold?

So my idea was to rank countries by the fraction of reasonable weights that result in them having the highest point count.  Not every point scheme is reasonable:  only a bronze lover (pyropusaphile?) would score bronze higher than gold.  So we need gold >= silver >= bronze.  And it seems unreasonable to have a negative weight on a medal.  Finally, the weights can be scaled so that the total weight is one. 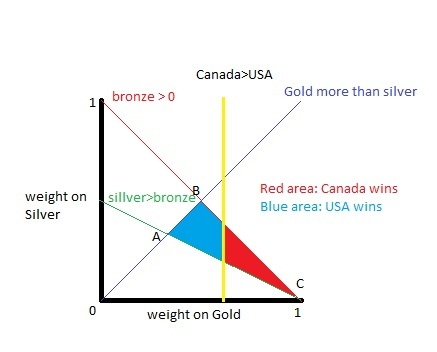 In the Winter 2010 Olympics, Canada was edged out by the United States in the Trick Medal Championship (TMC) by a narrow margin.  Canada had 14 gold, 7 silver, and 5 bronze;  the US went 9, 15, 13.  If you put enough weight on gold, then Canada wins.  But only 45.25% of the reasonable weights put enough weight on Gold for Canada to win;  the US wins for the remaining 54.75% of the weights.

The summer Olympics are now over, with the final medal count being:

with no other country winning at least 20 medals of a single type.

So the coveted TMC Award goes to …. the United States in a rout!  In fact, the US wins for every reasonable weighting.  Russia could win with a lot of weight on bronze medals, but not if the weight on gold and silver is at least that of bronze.

Equality in any of these can lead to weights where the country ties for the win.

Here, the US meets that condition.  Of course, it helps that there are a zillion medals in swimming (where the US does well) and only one in, say, team handball (described here as water polo without the water, which is only marginally informative).  But a win is a win:  if any representative of the US Olympic teams would like to drop by my office, I will be glad to give them the TMC trophy (which I will be recycling from my stash of high-school curling trophies I have dragged around the world).

P.S. The Wall Street Journal Numbers Guy has a similar discussion though, sadly, it does not include the above approach.