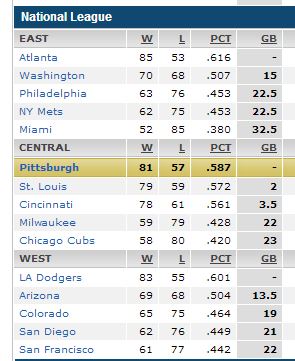 The newspapers here are full of news that the Pittsburgh Pirates (Major League Baseball) have broken a twenty-year reign of mediocrity by guaranteeing a non-losing season.  Since they have won 81 games in a 162 game season, that seems self-evident.

But those of us in operations research know enough to check out the details before leaping to a conclusion.  Consider the following situation:

1) The Pirates proceed to lose all their remaining games to end up at 81-81.

2) St. Louis and Cincinnati pass the Pirates, to win the division and the first wild-card.

3) Arizona ends up at 81-81 also, with all other teams (except division winners) with a worse record.

The Pirates would then play Arizona a one-game tie-breaker to determine who the second wild-card team is.  Suppose (horrors!) they lose again.  Where does the game count?  It turns out that tie-breaking  games count in the regular season records, as Wikipedia confirms.  So Pittsburgh would end up 81-82, for another losing season.  Note that it has to be a one-game tie-breaker:  subsequent playoff games are not included in regular season records.

I don’t think anyone is losing sleep over this possibility.  But a correct computer system for determining clinching of non-losing seasons would have to take this into account.   Having worked on such a system for another professional sports league, I can assure you that all the difficulty is in these near (but not quite) impossible events.  99% of the code handles cases that have never occurred, and are unlikely to occur in our lifetimes.

Note that if Pittsburgh wins one more game, then they are guaranteed a winning season:  a tie-breaker can’t turn their record into a losing (or .500) season.

Update 9/9: With the win tonight, the Pirates guarantee a winning season.  Now the streak is truly broken!  Go Bucs!